I was sitting at my favourite caffe, drinking coffee and working on my worksheet and writing. Things I do every Sunday morning. After a while a girl came in, sat down and ordered something. As I was watching her I had a kind of battle in my mind. I was thinking that I should go and start talking with her. It would be so easy. But no, I was there to do my work. That inner disagreement created a discomfort in me. You know it, you want to go to a girl and speak with her but something is holding you back.

In this very case I was holding myself intentionally. However, I decided to look deeper inside of me and my feelings, since this kind of feelings had grown distant to me over time.

Few hours later, I went to the same caffè to buy a coffee on my way home. As I got out, the same girl walking by. But this time I started talking with her immediately. It was natural, the right thing to do. She remembered me as well because we made eye contact inside and started talking.

I believe this is a perfect example of listening to your gut feelings, observing yourself and understanding why you do what you do. And as you let it go, the results come by themselves.

As we change our behaviour over longer period of time, things come natural to us and we might not notice the difference between the starting state and the point we have reached. One such change came to my attention recently.

If you practice awareness, you might notice that when it comes to procrastination, we have internal dialogue or a chain of thoughts preceding our action. For example, when I know I have to write an article on the website. Immediately, an inner dialogue commences. At first it was a monologue about how unpleasant it would be to do the task and often, I would put it off, to do it later.

As I got more aware of what I do in such situations, I started confronting my thoughts. I knew consciously they were holding me back, keeping me unproductive and so I started a dialogue. My inner voice would say things to stall me but I consciously intervened with reasonable arguments why I should do the task. This dialogue would last for several minutes, sometimes up to half an hour and sometimes I would persuade myself to act and sometimes the inner voice would win and I would not act. The reason for not acting was not that the inner voice had stronger arguments but rather that I exhausted myself during the dialogue, trying to persuade myself that it is productive to be productive.

Imagine you see an attractive person you want to speak with for whatever reason and you start this inner dialogue. After five minutes of debate in your head, you proudly stand victorious after presenting countless arguments why it is beneficial for you to do it and you have decided to do it. You look around and the person is not there anymore. You were so in your head that you did not notice they left and you are in the state of regret.

Often, it was time consuming, exhausting and unproductive. What I found out doing intuitively in the past several months more and more is a different practice. I moved from the monologue, through dialogue to silence. That is the act called letting go. Anytime the inner voice tells me how comfortable it is to stay inactive, I breath in and out and let it go immediately. That’s it. No arguments, no energy given into it. If I don’t give it energy in form of arguments, it does not react back. It is merely a notion.

It keeps me amazed how simple things really are, especially when it comes to letting go 😉

As you might know, I’ve been following Intermittent Fasting for quite some time. Recently (in March 2016 ) I started with endurance training which made it impossible for me to stay on IF with high energy expenditure. At least this is what I thought but it didn’t leave my mind.

The problem: How can I combine vegan diet with intermittent fasting and endurance training?

The nature of vegan diet is that you need to eat more food to get the same amount of calories compared to eating meat and dairy foods. Intermittent fasting restricts the “window of opportunity” when one is able to eat food, making it harder, if you have to consume higher amount of calories. Endurance training on the other hand, results in higher energy deficit. I guess you can imagine the struggle.

However, I am making it work!

Now that I understand more about nutrition, knowing that calories are not everything and by close self-observation and preparation, I can eat just enough to fuel my workouts while staying on IF and eating high quality vegan foods.

For example I did my long run this Saturday at the end of 18 hours fast. I did only 19,2 km and first hour was fasted at slower pace like I would have done anyway. After one hour I used energy bar to break fast and help protect muscles. What I noticed was that the run was one of the easiest I have done, specifically the first half. This was, I believe, thanks to training induced improvement but I had more than enough energy to run considerable uphill and then back down.

That means, fasted state did not interfere with my training!

Why would I do fasted run instead of normal, fed state run? Because studies have shown, that people can considerably increase in muscle glycogen stores when training fasted. For those, who want to shed fat, easy aerobic fasted activity results in fat being used as a fuel.

This sounds like a sound idea to me, as an endurance runner, to better adapt to fat (whily not eating keto diet) and improve muscle glycogen stores and then refuel on plant-based foods.

Vegan diet + IF + endurance training can be combined but don’t follow it religiously and slow into it. Simply put, do easy activities fasted (walking, sitting, working at desk, running at easy pace) and intensive activities fed (workouts, physically demanding job). 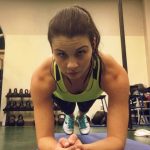 Rachel Brady -young fitness enthusiast and entrepreneur. Why would you watch that rising star? A few weeks back I did an interview with Rachel and I see her succeeding big time in the very near future. For all entrepreneurs, you can follow her on her social media @shotstoshakes to see her rise step by step through discipline and passion. We can bet 😉 I also interviewed her shortly on her story, you can find it here.