You may have noticed that you can’t stop eating after training. You train, you eat and an hour later you are already looking for food. So you reach for a banana that satisfies your hunger for a while, but then it comes back half an hour later.

This phenomenon is typical and nothing unusual among athletes. You can observe this especially after a long and / or strenuous training when you expend a lot of energy.

The exact reasons why this happens is not known. Hunger is a complicated matter, which is influenced by several factors, from your fitness status, through the training itself, stress levels, sleep, and last but not least, how much and what food you ate over the several days. The solution to this problem depends on its cause.

You can see similar response to walking. Bodybuilders have been using walking as a strategy to increase their energy expenditure while preventing increases in hunger levels for ages.
I observed the same to be true for most hard-training women (but in some men alike). They often report huge hunger after a HIIT training and high volume training, especially when they skip breakfast, restrict carbohydrates, or a day after an active day at work before hitting the gym (low relative energy availability). This eating pattern often leads to higher hunger levels compared to when they fuel properly. If you have been having trouble losing weight while exercising hard, or exercising more, this is a factor that can possibly prevent you from losing fat.
While we cannot make conclusions and recommendations based on this study alone, the effects of eating for performance are well-documented.

What can you do to suppress hunger and get the most out of your training?

Think about how you respond to exercise and consider the factors I outlined above. For example, my hunger is greatly suppressed after a long endurance training or a short but intense HIIT sessions (which doesn’t burn that many calories anyway) but there are people who have the opposite response.

Most often, the cause is insufficient energy intake during the day, especially around the training.
If you have a shorter but intense workout, you don’t burn as much energy as you might think. Some athletes feel disproportionate high hunger compared to the energy expended during such training. However, having a snack like chocolate milk or cottage cheese with a banana will help you alleviate your hunger and not eat everything in house when you return home.

During long endurance workouts, lasting more than 75 minutes, I recommend taking energy in the form of simple carbohydrates (gels, banana, dates, rice). Even if you are not hungry after a long endurance training session, it is wise to refuel soon after exercise to start recovery and possibly prevent huge hunger spike in the evening or a day later.

If you have such a workout in the morning, do not skip meals before the workout completely. Have at least a banana, or a handful of nuts, or yogurt with fruit, rice with milk.

It is normal for you to feel more hungry after heavy training. There is no need to be afraid of hunger and trying to tame it at all costs. Give your body the energy it needs, when your body asks for it, and you won’t binge in the evening while watching TV. 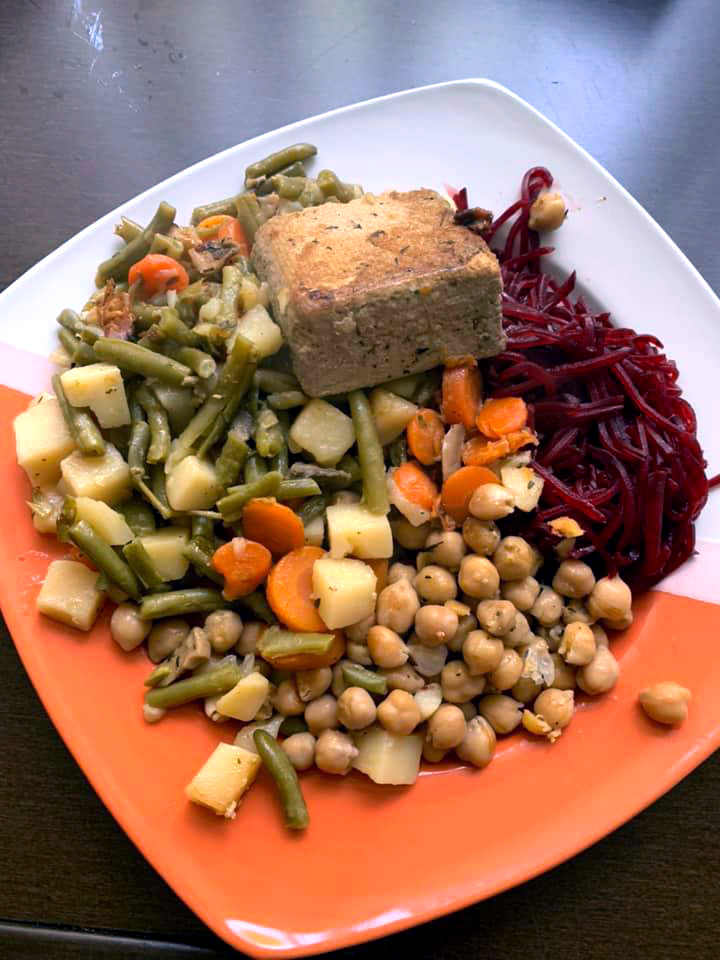 “I like the food, but I get hungry two to three hours later.”

The food you see in the picture could be described as healthy. It was sent to me by a friend who is switching to vegan diet. It contains complex carbohydrates (chickpeas, vegetables), as well as proteins from various sources (tofu + chickpeas) as well as some starches (potatoes), a little bit fat (tofu) and is rich in fiber.

Well, three hours later she wrote to me that she was hungry. Due to the fact that she is an active woman, a personal trainer, this portion was not enough for her. This is a common phenomenon in active vegans who try to eat “healthy”. When switching to a vegan diet, they usually switch to a diet that is voluminous and may feel full at a given moment, but it is insufficient in terms of calories.

There are three solutions:

Active people and athletes have different energy requirements than people with a sedentary lifestyle. While I recommend eating according to hunger and fullness, this strategy is not bullet-proof and needs further thought, especially when changing the diet. When athletes switch to a vegan diet, it often leads them to feel full after the meals but not for a long time.
Food volume is not a good measure of its energy content, so athletes eating wrong foods can feel full and still undereat. That results in low energy intake, bloating and consequently reduced energy and performance. Eating “healthy meals” does not guarantee you an adequate energy intake and can be ultimately unhealthy.

How to fuel during training

This website uses cookies to improve your experience while you navigate through the website. Out of these, the cookies that are categorized as necessary are stored on your browser as they are essential for the working of basic functionalities of the website. We also use third-party cookies that help us analyze and understand how you use this website. These cookies will be stored in your browser only with your consent. You also have the option to opt-out of these cookies. But opting out of some of these cookies may affect your browsing experience.
Necessary Always Enabled
Necessary cookies are absolutely essential for the website to function properly. This category only includes cookies that ensures basic functionalities and security features of the website. These cookies do not store any personal information.
Non-necessary
Any cookies that may not be particularly necessary for the website to function and is used specifically to collect user personal data via analytics, ads, other embedded contents are termed as non-necessary cookies. It is mandatory to procure user consent prior to running these cookies on your website.
SAVE & ACCEPT