(function(m,a,i,l,e,r){ m['MailerLiteObject']=e;function f(){ var c={ a:arguments,q:[]};var r=this.push(c);return "number"!=typeof r?r:f.bind(c.q);} f.q=f.q||[];m[e]=m[e]||f.bind(f.q);m[e].q=m[e].q||f.q;r=a.createElement(i); var _=a.getElementsByTagName(i)[0];r.async=1;r.src=l+'?v'+(~~(new Date().getTime()/1000000)); _.parentNode.insertBefore(r,_);})(window, document, 'script', 'https://static.mailerlite.com/js/universal.js', 'ml'); var ml_account = ml('accounts', '886987', 'e8r2w6y3d9', 'load');
How to eat healthy on a budget
Published: 20.03.20
If you care about your health, you should care about the food you eat. Many consumers decide to spend extra money on healthy foods, superfoods, and health supplements thinking they will help them improve their health.
But does eating healthy really come with a higher price tag, or can you eat healthy on a budget?
“My mother in law regularly brings over banana bread, and proudly tells me that she used whole wheat flour. Because whole wheat flour is “better” than all-purpose flour.
It’s “healthier”. Banana bread IS amazing, but you know what’s even more amazing???
Paleo banana bread.
Right? Riiiiiight?
Meanwhile… let’s JUST look at the cost of flour. [I checked the prices at a local bulk foods store.]
All-purpose flour – $0.28 per cup
Organic sprouted whole wheat flour – $0.86 per cup
Ground almond flour – $3.31 per cup
So, in flour alone, paleo banana bread will cost TEN times as much as regular banana bread. Is it… TEN times tastier? TEN times healthier? TEN times… better?”
shared a PN Coach Kate Solovieva.
And she is onto something!
Let’s explore how health claims, and health coaches who promote healthy foods and super foods can mislead you to think that eating healthy will cost you a lot.

The food is healthy. It says so on the package!

Logos and labels with health claims on the front of the package have been introduced to help buyers make healthier decisions. People also care more and more about eating healthy food and food producers know that too.

Consumers do react positively to health and nutrient content claims.

What are nutrient and health claims?

Health claims are statements about the helpful effects of a certain food consumed within a healthy diet on a person’s health. For example, a  healthy diet containing foods high in potassium and low in sodium may reduce the risk of high blood pressure, a risk factor for stroke and heart disease is a health claim.

And they know better than you that the package, and what is presented on the package sell. More specifically, the front side of the package.

But there are also other claims developed by the producers to make their food more appealing to the buyers.

General claims can make you think you are buying a healthy food without giving you a specific benefit: 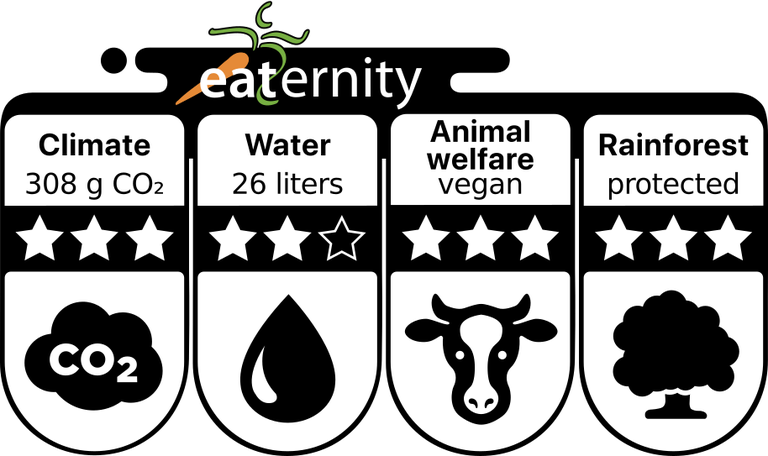 Buying healthy food makes people feel good about their purchasing decisions and willing to spend and eat more of it.

Previous research funded by safefood found that, in an experimental setting, adults perceived foods with claims such as “lower in fat” to be healthier and therefore a reason to eat a bigger portion, even though, unknown to most participants, the standard version and the “lower in fat” versions of the products contained the same number of calories.

Health and nutrition claims on the front of the package were designed to help buyers make healthier decisions. But some food producers use claims such as high-protein to make you buy their food.

For example, yogurt can be labeled as high protein, or a source of protein, but it does not necessarily mean it is better or healthier than cottage cheese that contains the same or higher amount of protein naturally.

Food quality plays an important role in our health. Where the food is produced and how it is processed impact its effect on your health.

Just because the food is labeled ‘organic’ does not make it healthy. You can get organic corn syrup or potato chips.

In conventional farming, pesticides and herbicides are sprayed on plants to kill weeds, fungi, and pests.

They are also used to quickly dry grains, which might be one of the causes of IBS, allergies, sensitivity to different foods, and why some people experience brain fog or negative reactions to grains. Gluten, should you avoid it?

Pesticides can cause health problems such as birth defects, nerve damage, and cancer.  These pesticides have long environmental half-lives and can accumulate in humans and other animals and thus biomagnify up to 70,000 times in the food chain.

A study from 2006 assessed pesticide residue in grains and rice and they concluded, that conventional farming produced more wheat and rice to satisfy the market demand, but it is at the cost of health risks and poses hazards to flora and fauna.

Research has demonstrated that organic fruits and vegetables have smaller amounts of pesticide residue than produce that was grown conventionally.

For example foods on the dirty dozen* list are sprayed heavily and you should avoid buying those, unless organically produced.

But buying organic oranges or conventionally grown does not make much difference. Even if they are sprayed with pesticides and herbicides, most of it is on the peel, which you don’t consume. besides that, all the studies showing the health benefits of fruit and vegetables were done on conventional food, not organic.

What conventionally produced food is safer to eat?

I’d also include legumes and grains* (there are regions where those are sprayed heavily like some states of the USA), potatoes, fruit with thick skin, dairy*, small fish, and algae.

* “The guide is based on results of more than 40,900 samples of produce tested by the U.S. Department of Agriculture and the Food and Drug Administration.”, therefore it does not reflect European or Australian produce and farming practices.

Does organic food contain more minerals and vitamins or does it taste better?

While I propose eating organic produce I also pay attention to price like many of you. The easy way out is to buy local, in-season produce from your farmers.

Make sure to wash your conventional produce thoroughly!

Manufacturers know that “organic” is a shortcut people use when searching out healthy food but keep in mind that even organic unhealthy food is still unhealthy food. In some cases, organic foods may have higher levels of nutrients than their conventional counterparts.

If you are currently consuming little fruit and vegetables, it is not worth considering, which is better. Start eating more fruits and veggies! All the health-promoting benefits associated with vegetables and fruits were discovered in conventionally grown produce. Despite their higher content of pesticide residues, the overall health effect is positive.

Eating healthy is cheap when you stick with these basics

As discussed above, labels such as organic, bio, and nice packaging also come at a premium price.

If you buy food at a farmer’s market, you can easily get premium organic produce, without a nice package, for fraction of the price. There are plenty of affordable foods you can purchase that are healthy and easy to add to your diet.

As long as you stick with traditional products, you get healthy and affordable food.

Here are some foods that are healthy & cheap:

I mentioned before that it can be really expensive to buy prepacked meals, canned food, fruit and seed mixes, products like granola etc. Fortunately, these food items always have a much cheaper versions in their raw and frozen forms.
Nut butters are super simple to make at home and much cheaper as well.
With a little planning and preparation you will find out how easy it is to have healthy, delicious and cheap meals.

We’re cooking like our great-grandparents did. They lived through the Depression, wars, famines, and other challenges… what were their secrets for feeding a family in uncertain and difficult times? (Hint: Potatoes, dried beans, grains, root vegetables…) – Coalition of Health and Fitness Leaders

For example canned beans, fruit and fish are more expensive than raw beans and frozen fish and fruit.
Granola can be easily made at home in bulk and so can be nuts, seeds, and fruit mixes.
Vegetables can be bought at a fraction of the price of salad mixes.
Canned, prepacked and premade meals are more convenient and you can use them when you are short on time.
Get to know your farmer, they will often throw some extras when you are a regular.
When shopping in a supermarket, bread and vegetables is usually heavily discounted later in the evenings. Just the day before writing this article I got a package of arugula for 0.05€ instead of normal price 0.99€!
Bigger packages typically also come at lower price points. It might be good to buy canned, dry and frozen goods in bulk.

Best nutrition bang for your buck

*Keep in mind the price of food is regional and seasonal to some extend so depending on your region, different foods would provide different nutrition/cost ratios.

Check the guides section for recipe books that all follow the simple, affordable, effective, and nutritious paradigm. 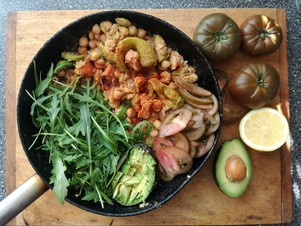 I just threw cooked chickpeas, diced tofu, spices, mushrooms, and simmered on the pan, then squished some chickpeas with a fork to thicken it, added fresh arugula, tomatoes, and a half of a small avocado. Sprinkled over with salt, ground pepper, tabasco, lemon juice and served on the pan.

P.S. Price per portion costs me 2.04€. this will depend on where you shop but it should be cheap in most parts of the world.

This website uses cookies to improve your experience while you navigate through the website. Out of these, the cookies that are categorized as necessary are stored on your browser as they are essential for the working of basic functionalities of the website. We also use third-party cookies that help us analyze and understand how you use this website. These cookies will be stored in your browser only with your consent. You also have the option to opt-out of these cookies. But opting out of some of these cookies may affect your browsing experience.
Necessary Always Enabled
Necessary cookies are absolutely essential for the website to function properly. This category only includes cookies that ensures basic functionalities and security features of the website. These cookies do not store any personal information.
Non-necessary
Any cookies that may not be particularly necessary for the website to function and is used specifically to collect user personal data via analytics, ads, other embedded contents are termed as non-necessary cookies. It is mandatory to procure user consent prior to running these cookies on your website.
SAVE & ACCEPT